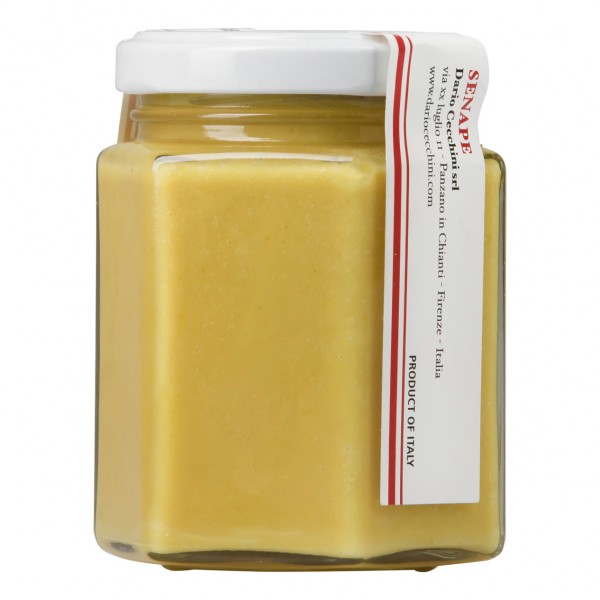 The mustard of the Antica Macelleria Cecchini is made according to an old family recipe. Fits to all kind of meat dishes, but also excellent with smoked fish.

When Dario Cecchini adds his Senape, it just tastes perfect!

It is assumed that mustard was first produced in faraway India in 3,000 B.C. and later exported to the West. Even the ancient Romans knew and appreciated mustard not only for the preparation of many dishes, but also as a remedy. And a true remedy in the culinary sense is also Dario’s mustard: the recipe for it originates from the Danish great-grandmother of Dario’s wife Kim. She herself grew up in America and brought the secret recipe with her to Tuscany. This much can be said about it: this Danish-American-Italian golden-yellow delicacy goes well with almost everything - of course with grilled meat, burgers and ham… But also with smoked fish and cheese - whether with Pecorino Toscano or Tyrolean mountain cheese - this mustard is always a "perfect match"! By the way the Senape is available in jars of 50 grams, 290 grams or 420 grams. And for this mustard, there is a simple rule: the more, the better!

The Antica Macelleria Cecchini is located in Panzano in Chianti - not far from the Piazza. Its owner, Dario Cecchini, has made his name famous worldwide as a meat specialist. He is actually not only Macellaio (i.e. butcher), because he can also conjure up excellent dishes from his meat and he proves that in the "Macelleria con Cucina" (i.e. butcher’s shop with kitchen) with his three food concepts. More than ten years ago Dario created his first restaurant concept with the name Solociccia. Solociccia means "only meat" - and that is exactly what was served then and is still served today: meat. A short time later Dario opened a floor above the Macelleria - the Officina della Bistecca. The idea was to prepare Bistecca alla Fiorentina and its variants fresh on the charcoal grill. Originally thought for a maximum of 20 people, the concept was fully succesfull and Dario enlarged it shortly afterwards. Then a third fleshy restaurant variation was added: the Dario Doc concept. This is a freshly grilled burger without bread, but with many fresh side dishes as well as the excellent homemade mustard and spicy pepper sauce. With the exception of Dario Doc, the following applies here: you pay a fixed price, a kind of "eat as much as you can" and wine, schnapps and coffee are included. If you wish, you can also bring your own wine and enjoy it with your meal - at no extra charge. When you are in or around Panzano, you should visit Dario - it is worth to see!