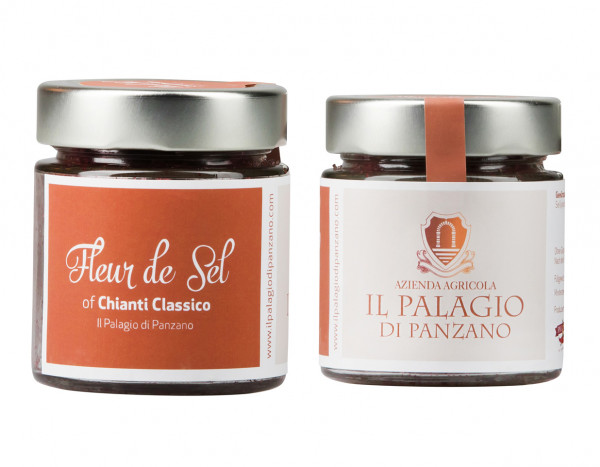 The idea behind this product was actually a simple but a very ingenious one: why do not combine two flavours as delicious as Chianti Classico and Fleur de Sel into one experience? Said - done. Monia Piccini, owner of the Azienda Agricola Il Palagio di Panzano, and Nina in Chianti have together developed this fleur de sel of Chianti Classico: the high-quality fleur de fel used for this salted red wine comes from the traditional salt marshes in the Ria Formosa and Sapal do Castro Marim nature parks on the Portuguese Algarve coast. The salt is certified by the Natural Food Certifiers, which guarantees the microbiological purity and the artisan correct production. By the way, fleur de sel means nothing more than "salt bloom", as the delicate, platelet-shaped crystals, which only deposit as a wafer-thin layer on the brine surface on hot and windless days are called. They are skimmed off by hand with a wooden shovel and dried in the sun for about 8-10 weeks. Fleur de Sel is a pure sea salt with a very high content of minerals, magnesium and calcium. Since the Fleur de Sel is moist in consistency, it easily absorbs other flavours. Like, for example, the unique aroma of Chianti Classico from Il Palagio di Panzano. During the drying period, the fleur de sel is sprinkled with the red wine in stages and mixed by hand again and again. On the one hand, the salt should be protected from clumping and, on the other hand, it should be ensured that every salt flake is flavoured with sufficient wine. The wine salt should then not be used for cooking, but as so-called finger salt. In other words, you sprinkle it over grilled meat or vegetables. This fine salt is also perfect for serving salads. Even in small quantities it unfolds its full and rich taste - with a hint of Chianti Classico on the palate.

The Il Palagio di Panzano range includes five different red wines - all typical for Tuscany. But each beeing unique: the Chianti Classico is produced since 2014 only from Sangiovese and forms the basis of the range. Since the 2012 vintage, Sangiovese grapes have been used exclusively for the Riserva as well. The result: purple red in the glass and an aromatic bouquet of plums and dark berries with the unmistakable, gentle touch of oak wood. Under the name "Le Bambole", the Piccinis produce an excellent Chianti Classico Gran Selezione, the grapes for which come from a south-facing vineyard in the middle of the Conca d’Oro of Panzano. In the assortment is also the easy IGT Ignobile and the elegant Torgentile, which is made of  60% Merlot and 40% Sangiovese. In 2017 the Rosato Aldemara joined the assortment as well- from one hundred per cent Sangiovese, named after Monia’s grandmother. Monia and Franco, convinced that the future of viticulture can only work with a sustainable approach to nature, switched to organic farming in 2007. The official organic certification followed in 2013. Not for nothing is the small Panzano celebrated by the international wine press as the organic district of Italy!

The "Azienda Agricola Il Palagio di Panzano" vineyard is located in the heart of Chianti Classico. Monia Piccini has taken over the estate from her father. Today Monia and her husband Franco run the winery - both born and raised in Panzano. The two Sangiovese and Merlot grapes are cultivated on eight hectares of vineyards, which extend over the best sites in the famous Conca d’Oro, in the golden valley of Panzano. The special location in the shell-shaped valley ensures that the grapes enjoy sunshine during the day and can relax in the coolness of the night. And the 1,500 olive trees also like this whose fruits are used to make a fruity, spicy olive oil. Also part of Il Palagio is the agriturismo. Guests from all over the world spend here a vacation "with family connection" in one of the enchanting rooms or apartments. The house, with its many corners, its hidden squares and courtyards, its picturesque terraces and the enchanted garden, and of course the dream pool, from which you can enjoy a sensational view over the entire Conca d’Oro, is actually a small fairytale castle.