In the nose very inviting and engaging, on the palate fruity, berry cocktail, with fine acidity and tannins.

Similar to the Tzingana of Monte Bernardi, the Tzingarella Colli della Toscana Centrale IGT is mainly produced from international grape varieties such as Merlot, Cabernet Sauvignon, Cabernet Franc and some Colorino - a native grape variety from Tuscany. Since the vines for the Tzingana are already 50 years old, Michael Schmelzer started planting new international varieties a few years ago. The plants, now between five and seven years old, already produce grapes, but they do not yet have the full potential needed for the Tzingana. This is why the young grapes are bottled as Tzingarella. This makes the Tzingarella the "little brother" of the Tzingana. The vinification is also the same as for the Tzingana. In other words, all grape varieties are vinified together, i.e. not as a single variety. Alcoholic fermentation takes place in steel tanks at a maximum temperature of 30°C for 20 to 27 days. The wine then undergoes malolactic fermentation in oak barrels and then in used wooden barrels for 18 months. Grapes and vinification are the reasons for this red wine from Tuscany to present different olfactory and aromatic picture than the typical Chianti Classico wines, which are mainly produced from Sangiovese.

Monte Bernardi: a piece of Tuscany and Chianti Classico

The road SS 222, the famous Chiantigiana that connects Florence and Siena, passes next to Monte Bernardi vineyard, owned by Michael Schmelzer. Here, in the oldest wine-growing region in the world, lies the small medieval village of Panzano in Chianti. At every corner you can see the great names of the local wine world. And exactly here is situated the Monte Bernardi winery, at the southern tip of Panzanocan. The German-American Michael Schmelzer, who studied oenology in Australia, is also called "Mr. Sangiovese". Since he took over the management of Monte Bernardi  in year 2004, he has not only cultivated the vineyards according to Rudolf Steiner’s biodynamic principles, but he is also constantly maintaining ancient traditions and genuine taste of Tuscany - and this is undoubtedly the Sangiovese grape.

Sangiovese, Canaiolo & Co. - only the best for the best wines

The great love for the autochthonous grape variety Sangiovese brought Michael Schmelzer to the heart of Tuscany and kept him there. And his dedication is also clearly reflected in the Monte Bernardi range: in addition to the "door-opener" Chianti Classico Retromarcia, which is made from pure Sangiovese, here are produced two other Chianti Classico Riserva, the Monte Bernardi Chianti Classico Riserva from Sangiovese with a small addition of Canaiolo and the Sa’etta Chianti Classico Riserva from 100 per cent Sangiovese. Besides the super tuscan Tzingana, which is produced from the international grape varieties Cabernet Sauvignon, Cabernet Franc, Merlot and Petit Verdot, the Tzingarella is relatively new in the wine family of Monte Bernardi. This blend is the "little brother" of the great Tzingana because it is made from the grapes of even younger vines.  The strong rosé is a fruity summer drinking pleasure. The assortment is completed by a excellent Olio Extravergine di Oliva - the olive trees also grow at Monte Bernardi.

Panzano in Chianti: the "grand cru" of Chianti Classico

Around 15 of the 53 hectares of land belonging to Monte Bernardi are planted with vines. Some of the plants are more than 50 years old. There are also numerous olive trees on the surrounding hills, which are certainly even older. This interplay between the careful treatment of nature and the perfect landscape conditions can produce unique wines: the southern slopes are located at an altitude of 400 to 500 metres above sea level. The Pesa river flows nearby, which together with the surrounding forests provides an ideal microclimate. The soil also plays a major role in viticulture. Here at Monte Bernardi you can find the perfect for viticulture  slate (Galestro), sandstone (Arenaria-Calcare-Pietraforte) or limestone (Alberese) soils . That is the reason why these hills south of Panzano in Chianti are called the "grand cru" of Chianti Classico.

Purple red in the glass, with a dark core. Complex aroma in the nose: aromas of citrus fruits, blueberries, blackberries, cassis, but also delicate spices of pepper and wood. Overall, this Rossolino smells very inviting and engaging. On the palate it is fruity, reminiscent of a berry cocktail, concise acidity with fine tannins, good structure and liveliness. In the finish still some black tea. 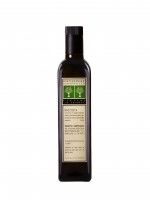