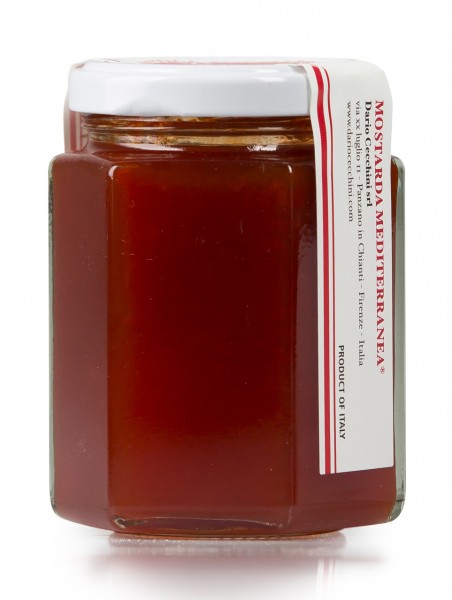 A paprika sauce that fits to beef, pork, lamb, poultry, but also wonderful with cheese and chocolate.

A bright red, sweet paprika sauce with a hint of spice

A "mostarda" is actually a mustard - similar to a "senape". However, the Mostarda Mediterranea by Dario Cecchini has nothing to do with mustard in the traditional sense. It is a bright red sauce made from a mixture of sweet peppers and hot chillies. The sauce has its origin - at least Dario tells us so - in monasteries, where the monks conservate fruits and vegetables to preserve them from the hard winter months. And one of these monastic products was the pepper sauce. A sweet sauce with a slight hint of spice that goes well with everything: with meat, fish and cheese anyway. More courageous ones should also try it with chocolate. A true firework of aromas! The sauce is available in jars of 50, 220 and 490 grams.

The Antica Macelleria Cecchini in Panzano in Chianti - the paradise for meat tigers!

Dario Cecchini and his Antica Macelleria Cecchini in Panzano in Chianti became famous not least because of his meaty creations, which can either be bought in the Macelleria or tatsted at the restaurant. Because the butcher’s shop also has a Cucina, a kitchen in which are served Bistecca alla Fiorentina, Dario Docs and Solociccia dishes, i.e. only meat. Among other things, Dario keeps rediscovering old recipes and giving them a new life: a real treat for the palate are the fennel salami or the Burro del Chianti - the Chianti butter. It is not butter, but lard flavoured with herbs. Also the Sushi del Chianti, a Beef Tartar, can be found at Dario’s counter. A regional highlight is the Tonno del Chianti, which is actually not tuna at all, but pork cooked according to a special procedure that looks and tastes like tuna.

In addition to the Mostarda Mediterranea Dario also has a number of other non-fleshy products in his Antica Macelleria Cecchini. For example behind the poetic name Il Profumo del Chianti lies an aromatic salt flavoured with Tuscan herbs. In his restaurant Dario uses the salt mixed with olive oil as a dip for raw vegetables. But the salt is of course also excellent for seasoning dishes and salads. Another spice is the Fiore di Finocchio. These are dried flowers of wild fennel, which with their special taste are also suitable for refining many Mediterranean dishes. A highlight in the non-fleshy range is Dario’s mustard. This golden-yellow delicacy, made according to an ancient recipe, goes well with grilled meats, but fits also excellent to cheese! In addition, under the Dario label there is an excellent Olio di Oliva extra vergine. A must for those who like it hot are the extra hot chilli peppers in oil called Bruciaculo. If you are in or around Panzano in Chianti, you should definitely stop by the most famous butcher in Europe. It is worthy! Even just for a glass of red wine in the sales room accompanied by some cold specialities.